Anticipating Summer In my Hempathy Top and Skirt

OK, so it was up to 67 degrees last week, but yesterday I woke up to 1" of snow, and it continued to snow for the entire day. However, according to forecast, by the end of next week, we should be back in high 60's nearly 70's again.  That's Tahoe for ya, the mood swing.

It had been so warm that I was getting into Spring/Summer mode.  I started dreaming wearing tank tops and skirt.  I don't think it was purely the weather.  I was also so wishing for the semester to be over.

I busted out my stash of Elsabeth Lavold Hempathy, one of favorite summer yarns.  Based on the motif from Tulip Shawl, I decided I would make a skirt using that motif singularly at the hem.

But before I got to the skirt, I wanted to make tank top with draped back to go with it. It was knitted from bottom up with a tiny triangular, lace insert at the hem edge on the back.
To get the drape, I made increases in width as I knitted upwards only on the back  I like it a lot. for the neck at the front, I used shallow square neck. I wanted boat neck, but I was afraid of the look may end up looking like I was choked by fabric pulling on the back it if was too high up of neck line.

The top was done fairly quickly 'cause I was so curios if the draping would come out as I envisioned. I did have to rip back the top a bit above armhole. I moved the increases closer to the side seam edges from the center for improving the way the drape would be.

I did have one big problem, I was short of yarn. Based on past experience, Hempathy colors are never close match from different dyelots. I ended up begging a fellow Raveler to sell me her leftover ones that are in the same dyelot as what I had. Much thanks to to Vicky's quick response and shipping, I received the yarn exactly as I was running out.

Then the skirt. The designing of the skirt was easier. Because I knew there wasn't gonna be real suprises, I did get slightly bored with the endless stockinette stitch after a while. Coupling that with days I had to deal with the continuing drama at work, it took 2 weeks when it could've been done sooner. Sure enough, the skirt came out exactly as I'd hoped.

Both the top and the skirt are now nice and soft after drying them in the dryer.  I have to pat myself on the back for taking the shrinkage into account when designing them. The all so important swatching.

Now I'm just waiting for my summer to begin.

Posted by yellowcosmo at 1:01 PM 2 comments:

A Shawl of Tulips

I can feel it! Spring is in the air.
This week I finished a shawl with tulip as my motif inspiration. The motif design took me several tries.  It actually took me longer to design than to knit the shawl.

I had the preliminary idea of a tulip motif sprouting in my head few weeks ago, and I even drew up the rough chart. I got sidetracked with doing other stuff, so I didn't start making the design until last week. Somehow, the funny weather got me really impatient with making modification after modification, swatch after swatch,. There were few days between the first and second take, and coupla days before the third take.  Finally I thought I was happy with the third swatch, and next morning I woke up and decided the shape looked too much like a generic leaf shape.  So it took me 4 swatches to get it right.

But I'm happy to say that the shawl itself took me only 4 days to knit. 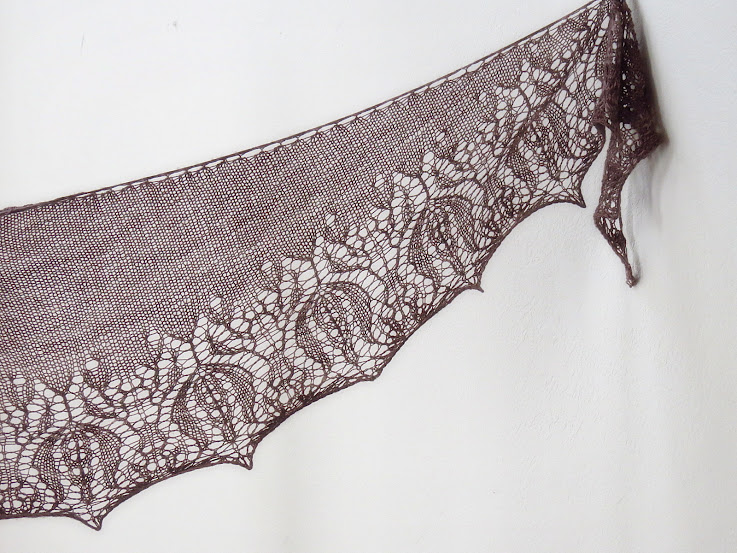 The crescent shape shawl was knitted from top down, with the fun part of lace at the end.  Even if I don't wear much lace, I sure love knitting them.

Posted by yellowcosmo at 5:22 PM 6 comments: