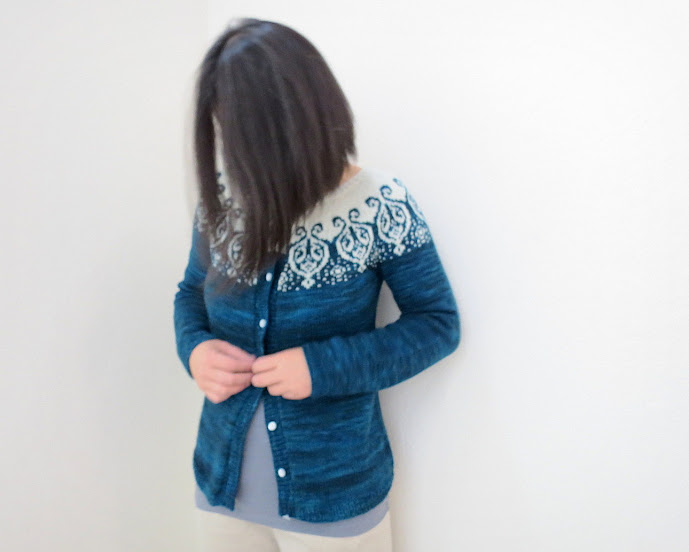 I swear I really was going to finish Inishmore before moving on to the next project.  But apparently the cosmic had other plans for me.  One evening the cord of my only size 5 needles broke off from the needles while I was working on that sweater.  I knew I'd have to wait 'till Monday when I go to work to pick up new needles since there are no shops in town that carries it.  Well, well, well...

I figured it was about time to remake "Undecided." I quickly re-charted the motif to minimize long floats on many rows.  So now there are only 4 or maybe 5 (cannot remember) rows out of 34 rows that have floats on the back for over 6 stitches.  This would help with better tension around the yoke. 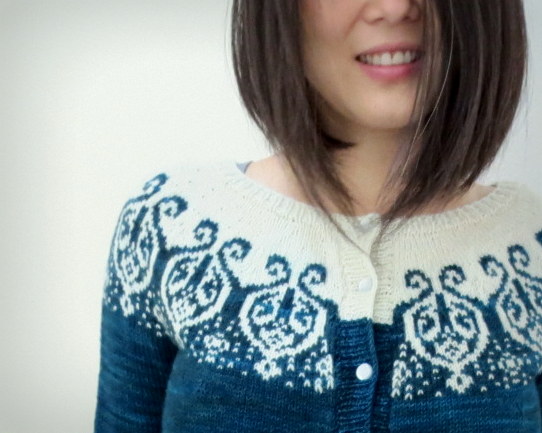 With both the yarn and the needles available in stash, I started the sweater right away.  I was looking forward to it, mostly because I knew the stockinette stitches would allow me to watch more TV and movies while knitting. Even though I was enjoying listening to audio books while knitting Inishmore, but I was really hoping for something that required less effort in concentration.

This version is also high contrast in tone. I used The Sanguine Gryphon Bugga for the sweater. Blue Lobster and undyed yarn.

I had fun knitting this top-down, round yoke sweater with steek.  I realized how much I missed knitting my own design I must say. There is certain freedom in not having to read every line so carefully. 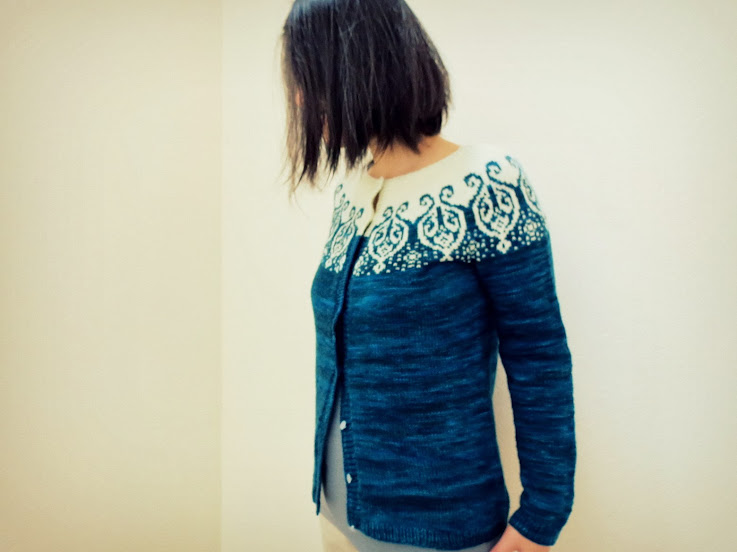 A very exciting knitting related story,  I got to meet Romi, the fabulous knitting designer last week.  We met up for coffee.  She moved to this area over a year ago.  OMG, she is so cool.  We chatted for hours. This was the first time I ever met other designers in real life.  I really love her designs and I'd made coupla of her shawls, Carson and Zephyr Cove, and love them both. We chatted about the area, about our lives here. She is a trained musician, and  plays French Horn, how absolutely amazing is that??  I felt a bit like a fangirl at first, getting all giddy about meeting her. But she is just smart and lovely, so our conversation was really fun that we talked mostly non-knitting things.  I felt so happy to have met her :)  That was the highlight of this month for me. 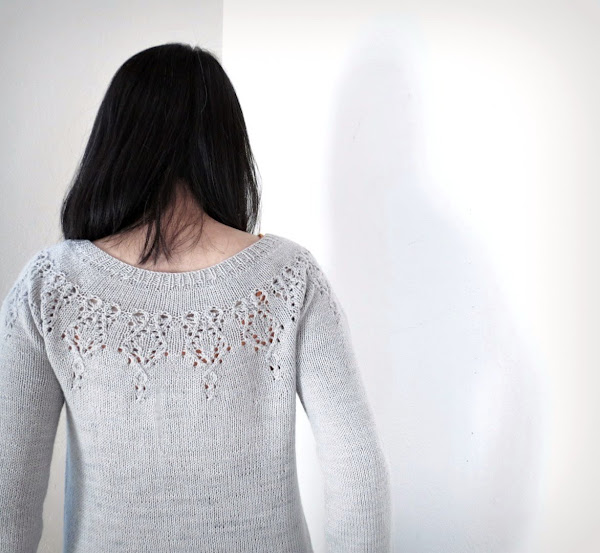 OK, so I'm not doing much knitting lately, but I do have a new pattern.  It's Juno.
Thanks to all the amazing testers, Emma, My Anh, Bao, Donna, Anj, Magda, Sandra, Mona, and Rachela, and of course Judy for tech editing the pattern. 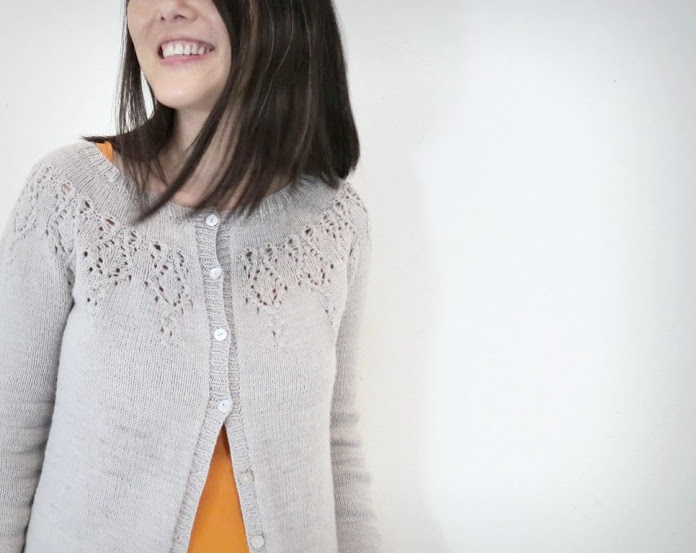 Personally, I do really love this stitch motif.  I honestly love combinations of lace and cable.

As with things on my needles, I have to confess that I'm loosing steam with Inishmore.  Everyday I'd stop after knitting just one or two rows.  I really would love to start another project.  But I'm afraid if I do, I'll never get back to Inishmore, and it had been soooo long since I promised myself I'd reknit it.  We have next Monday off due to Veteran's Day, so hopefully I can at least make a little more progress on that sweater.


Posted by yellowcosmo at 11:19 PM No comments: 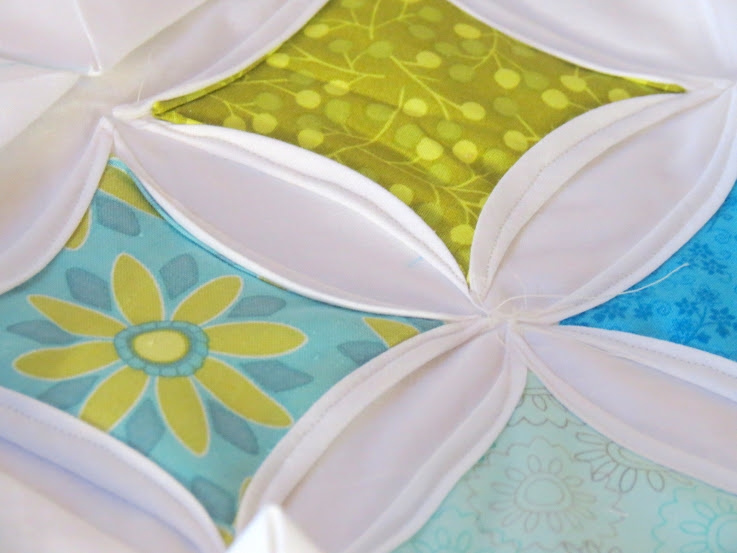 As I slowly chugged along on the Inishmore, I also decided to start a slow sewing project.  I'm making patchwork. I think it's called piecing?  First I was calling it quilting, but after reading somewhere online I realized quilting refers to the stitching layers together, while putting pieces together for surface motif is called piecing. That goes to show how much I know about quilting.

Usually I'm not very interested in the looks of quilts, but lately I kept on having this image in mind of something I've seen on internet that is kinda modern looking but of a traditional patchwork. I remember seeing something with geometric shapes as well as organic lines and had an origami element in it. After some Googling, I learned what I was thinking of is called Cathedral Window. I found several blogs with tutorials on how to make them. I tested out couple methods and I liked this tutorial the most from a blog called "The Jilted Ballerina."  I skipped the step of adding batting to it. There were other tutorials that included more sewing and less ironing, which could be faster, but I simply wasn't able to get neat squares based on how I sew, so I stuck with the folding and ironing method.  It really was like making origami. 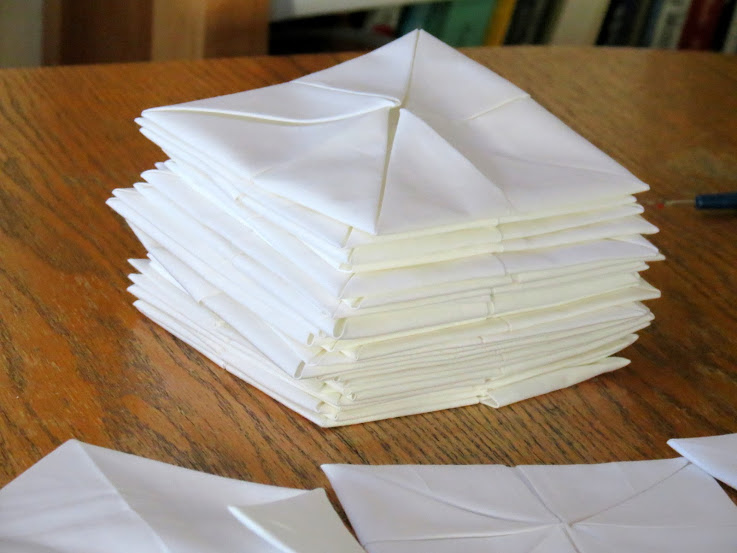 I stopped by Joann's after work last week and got 6 yards of 44"-wide white muslin, and some 1/4 yards of fabrics in different colors for windows, As it turned out, the entire patchwork will be much smaller than I was expecting. When I was buying the fabric I completely forgot to take into consideration how much yardage the folding would eat up. After folding, each square ended up being only 5 1/2" square, a little less than half of the original 12".  From six yards I got 54 squares minus the 3 squares cut badly. So, if I do 6 squares by 8 squares piece that is 48 squares. I'll have something like 33" x 44", that's slightly less than 1 yard of 44". Wow, what a difference. 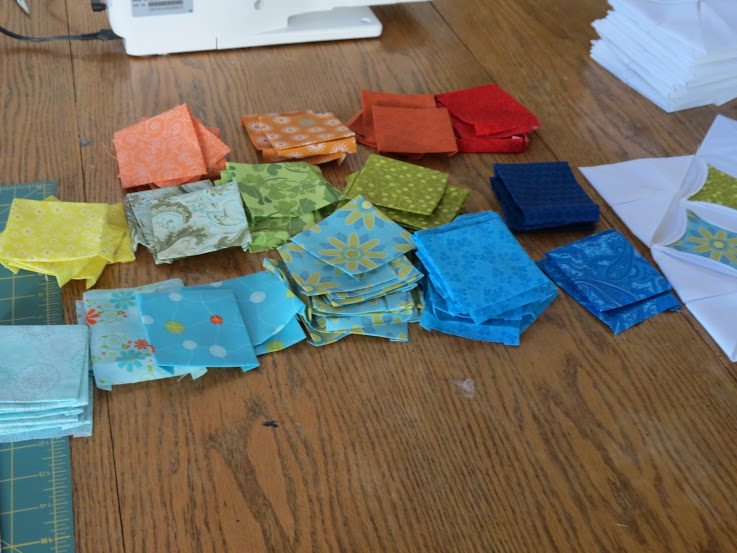 Obviously I don't have enough yardage to make a full-size quilt.  Frankly, I don't think I have the stamina or the patience to iron more squares, anyway.  Perhaps I'll make a table runner or something out of the ones I have. We shall see. This project may take a while, the ironing is such a chore.  I got most of the windows sewn on, and I need to put panels together.

The ironing sure was a total chore.  I spent ALL day on Friday ironing, and more ironing on Saturday.  It reminded me those days back when I was in my early 20's, working as a office temp in between jobs.  All the mindless, and repetitive chores. Those were such easy work, very often the supervisors would be so "shocked" by my ability to accomplish the assignments with no problem and in good time, talking about easily satisfied low expectations. Anyway, I'd never ironed so much fabric, ever!  I finally began sewing up the windows yesterday, that was a lot of fun, so much more fun than ironing. Machine sewing sure made it fast and east.

I'm still totally undecided on what I want to do with the patchwork...  I guess I wasn't thinking about that at all when I jumped right into the project, I just really wanted to make these patches.  I'll post the final project when I'm done, hopefully it won't be too long from now. 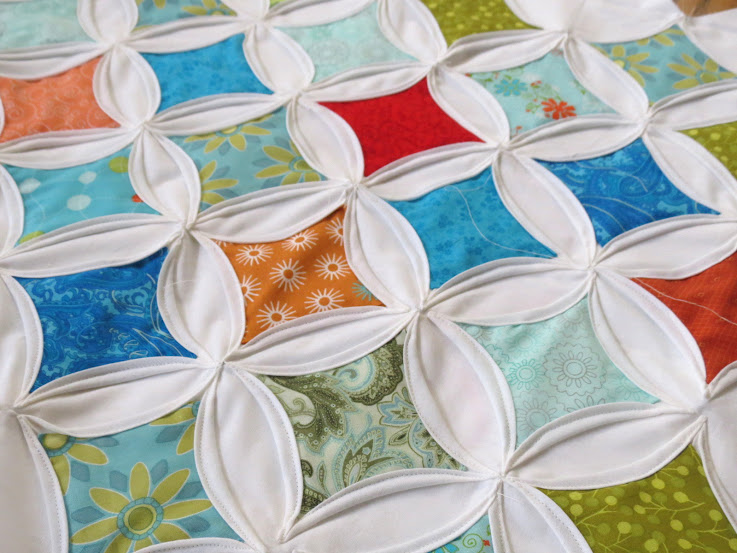 Holding them up to the window reminded me of slides. 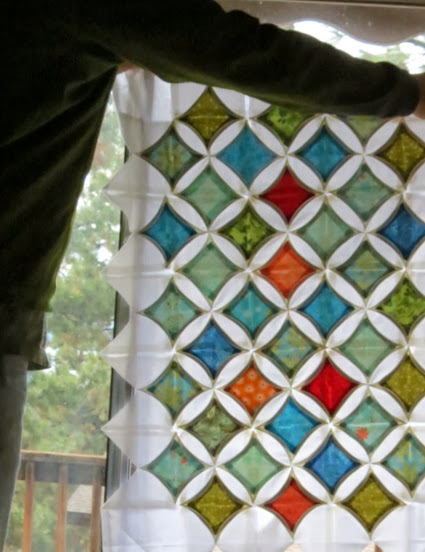 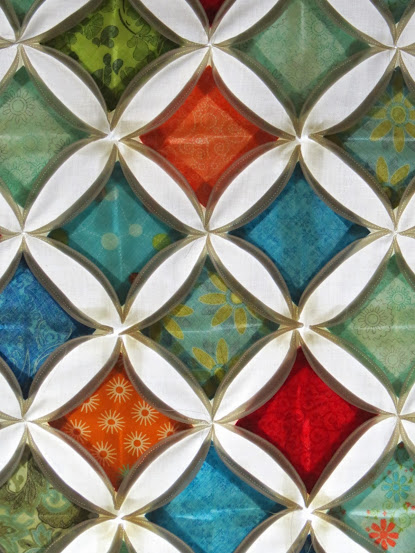 Posted by yellowcosmo at 4:30 PM 2 comments: