Taking Lines for a Walk 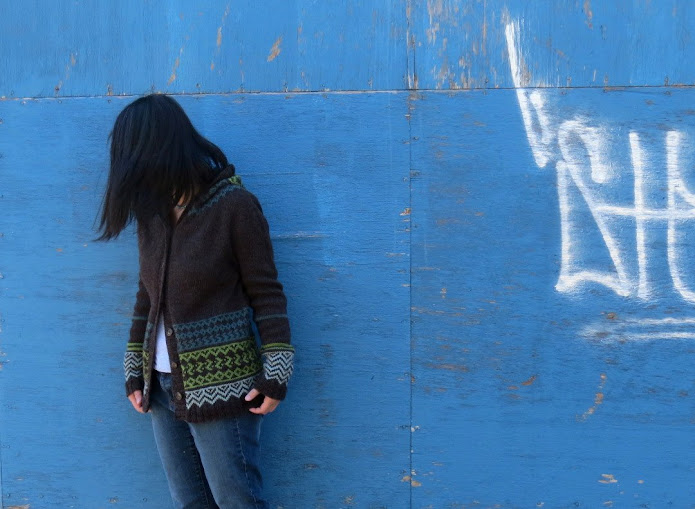 Coupla months ago Elann had Ornaghi Filati Lana d'Irlanda that comes in 100g balls for $4.48.  I got carried away and bought a bunch and used up some credits I had at Elann.  When the box arrived, I was so disappointed.  It was the first time I was ever disappointed with a purchase with Elann.

The wool was stiff and scratchy even after wet-blocking the swatch.  I thought about returning the box of yarn. But the colors were totally up my alley that I never took it to the post office.

Few weeks back, when the weather was still cool, I decided to make a sweater with the yarn.  Part of it was out of guilt of spending the money/credits.  I figured once I used it up I won't have to see the box and feeling guilty. The other part was I wanted a brown sweater. 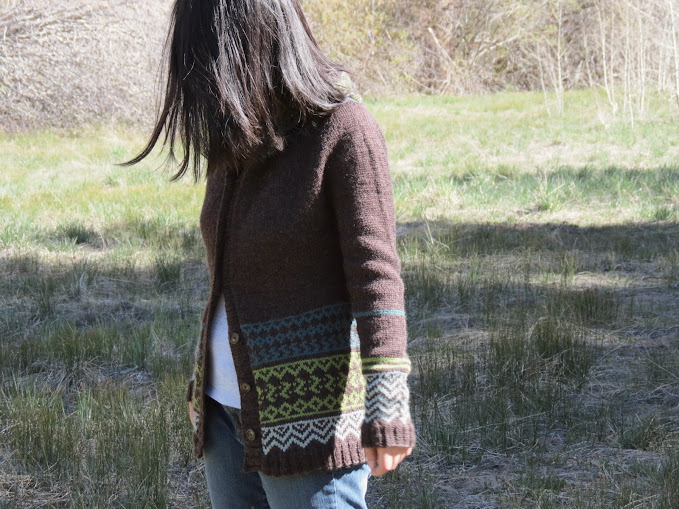 I really, really wanted some simple, primitive geometric colorwork pattern.  And I wanted the motifs in lines, not shapes. So I drew out few quick stitch designs and did one calculation for hem width, and proceeded to cast on for a pullover with bottom-up construction. I figured I'd do all other calculations as I go, too anxious to do a lot of prep work. I began to fall in love with the sweater as it grew. The idea of a hoodie cardigan with mirrored design on the hood somehow got into my head, so I just kept knitting and trusting the button band would compensate for the steek width.

Sleeves were knitted separatedly and joined at underarm.  I went for a circular yoke, and honestly not extremely happy with the way decreases worked out. I probably could've made one extra round of decreases earlier instead of half way up.  Not sure if it was just the nature of circular yoke (I kinda suspected so) or the specific decrease rate I had, or the weight of yarn, there was some puckering above the first decrease round pre-blocking.  Fortunately that got mostly flattened out during blocking. 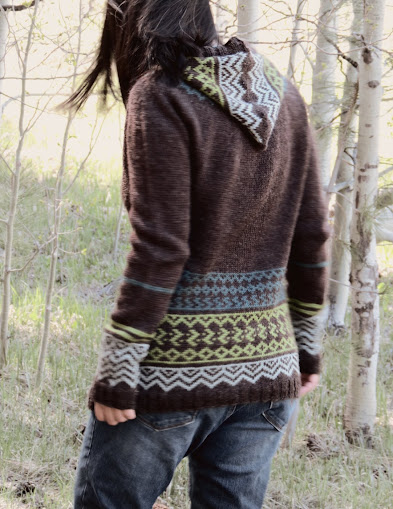 The hood was too short at 10".  Although it stretched out a bit after blocking, I still should've made it longer by adding coupla stripes before the motif began.  Oh, well, live and learn.  By the time I finished the hood I was so ready to be done with the sweater because it was 70+ degrees outside.

Without the pre-planned steek stitches, I just tried to machine sew the lines as straight as I could.  Sadly, it turned out to be the worst steeking job I'd ever done, crooked sewn lines, BUT still workable, and that was all I need.

The sweater did grow a bit after blocking both length and width wise, but I think it still wears great, albeit a bit a on the large side. Since I could not spit splice the join (felted joint) not matter how hard I tried, I think it may be safe to mist it and pop it in dryer for 5 minutes to see if it will shrink back just a little.

I'm very happy with the geometric motifs and the colors. The hoodie is pretty much my style of everyday wear, so I think I'm actually gonna wear this one to work some day.

As for the yarn, I'm very glad I didn't return them.  Yes, it's a but rustic, but totally fine over a t-shirt. and I really dig the woolly and rustic look of it.  Woohoo, I still have enough of it to make another sweater. 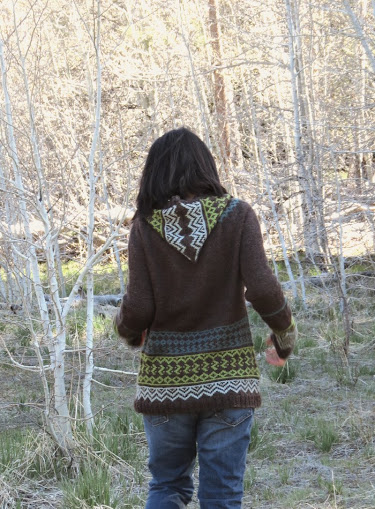 Posted by yellowcosmo at 2:52 PM