Sometimes when I make designs, there are certain elements that I know will be a problem for other knitters even if it doesn't bother me at all.  One example is garter stitches border before plain stockinette stitches. Garter stitches border has been my favorite go to border because of its simplicity and that it wouldn't change shape and measurement like ribbing borders. However, one thing with this combo is the tendency garter border has with folding over. It never bothers me personally because blocking always does the magic.  However, there are yarns that aren't so great at keeping blocked shape for a long time. Also it is a problem for some knitters.

Once again, I was using the garter border for a current project.  All of sudden an idea came to me of using knit through back loop for few rows as transition to lessen the folding over of border.

So I did a swatch yesterday, and it worked! I was so thrilled. I knitted 6 rows of garter border, then 3 rows of ktbl before the plain stockinette stitches. The tighter and slightly stiffer rows of ktbl kept the border from folding over.


I was so excited that I decided to try to find a way of doing non-rolling stockinette stitches border.  In the past I'd read about and tried the twining method (using 2 yarns to alternate stitches.) Maybe I didn't do it quite right, but that didn't work too successfully for me.

I played around with ktbl for the whole afternoon yesterday. That didn't work. Then I tried slip stitches to be picked up later with the yarn float.  That seemed to be pointing towards the right direction more. So I played around a little more to find an easier way of doing it. Finally, after a whole afternoon had gone by, I was able to find a way of doing stockinette stitches that doesn't curl up.

This did add a little bulk to the section.
Coupla problems arose with this method: 1. the gauge became looser than normal stockinette stitches, and 2.  it had the same folding over problem as in garter border and 3 rows of ktbl didn't seem to work quite as effectively as with garter border.

To solve the problems, I switched to smaller needles after CO, and changed it back to larger needles when beginning regular St st. And instead of simple rows of ktbl, I did ktbl instead of k on the last row of the border section and alternate that with k 1 st below. And on the following row I did ktbl on the same previously ktbl stitches, and k the other stitches before I began the plain St st knitting. These solution seemed to work.

I felt like I had a productive Sunday afternoon.


This is how I made my swatch:

Begin Stockinette Stitches for desired number of rows by
k on RS rows and p on WS rows, end with a WS row.

I charted out the instruction: 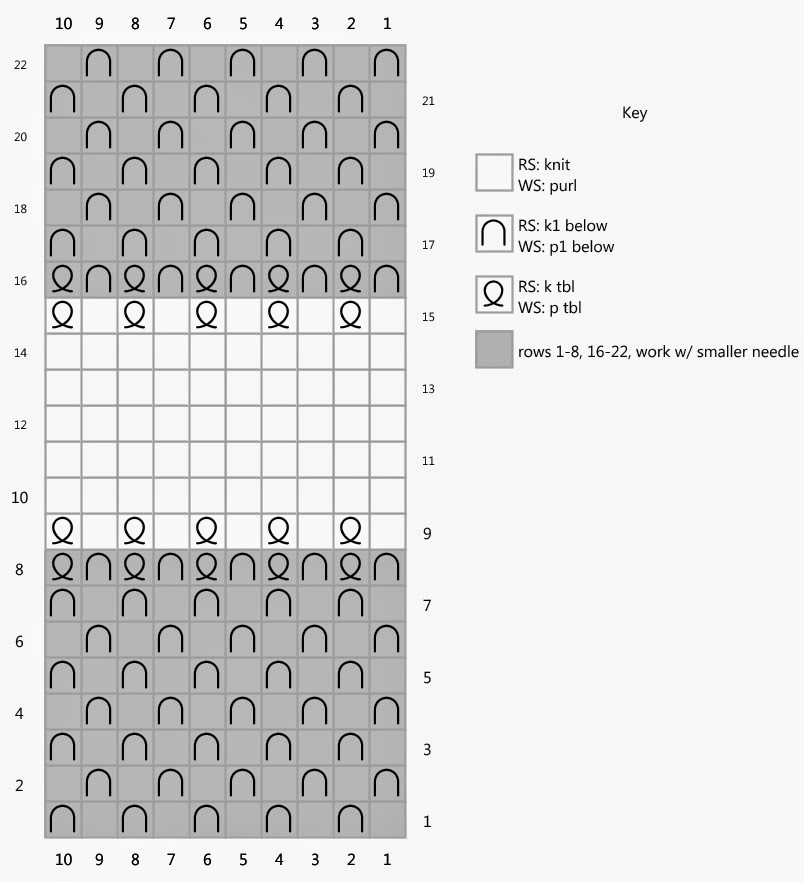