Trip of a Lifetime - Part 2

Then Bhutan!!
Bhutan, oh Bhutan. I've been back home for 3 weeks now.  It was not only because the busy new semester with the most stupid drama after drama created unnecessarily by people (what an unfortunate way to be welcomed back,) but I just couldn't figure out a way to write about my trip properly.

I'm certain part of me have changed because of this trip. It was like I'd peered into an alternative world that showed a different way of living. And that way of living leads a deeper sense of contentment and thus a stronger appreciation of life.

After Taiwan, it was so nice to be somewhere not nearly as humid.  Bhutan was a lot dryer, though not as super dry as here in Nevada, but very pleasant to walk around.  Coming from about the similar altitude of 6000 to 7000 ft above sea level, I felt right at home.

Yes, Bhutan, in many ways reminded me of Tahoe, but with taller and steeper mountains and wider range of greeneires besides evergreens.  Bhutan was so green, and mountains everywhere.  I have never been to Tibet, but according to Ellen, Tibet was much more desolated landscape in contrast to the greens in Bhutan. Most of the towns we visited were situated deep in narrow valleys carved by the rivers over time.

You can't talk about Bhutan without talking about the landscape because that is what made the culture and its people.  Bhutanese' relationship to the land is very different than what we're used to.  Rather than seeing land as something to take advantage of or to be conquered, there's is a deep respect, and there is a humbleness towards the land. This was obvious in the way our guide talked about places. 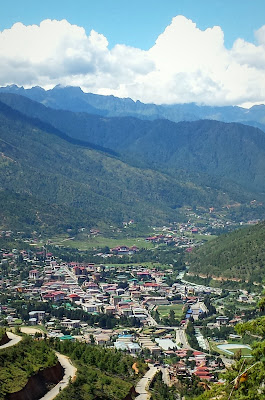 Thimphu, the capital of Bhutan


We flew from Taipei into Bangkok and changed flight there.  Bhutan airline is currently the only airline that flies into Bhutan.  Its current route starts at Bangkok with a quick stop in Kolkata in India, and lands in Paro.

On the flight, I chatted with the young Bhutanese man who sat next to me.  He told me the education in Bhutan is free for all its citizens.  If grades are good, the government would pay for college education oversea.  Many young people choose to go to India and sometimes Thailand for college education. In return they'd work in public sectors for at least few years upon finishing their education oversea.  Also, basic health care is free for the entire country.  That was the first time in my life I'd ever heard people talk about their love of their government. I came to find out during the trip that sentiment seems to be shared by the entire country. Everyone in Bhutan believes their government is taking good care of them (of course, we didn't go to South Bhutan where there was the history of Nepalese speaking people being kicked out of the country.)

I'd flown into many places in my life, but never had I seen an airport where every passenger that got out of the plane being so enthralled with the landscape around.  Everyone stood on the tarmac and was taking photos of the view around.  It felt magical to land in the middle of beautiful mountains and clear sky as the backdrop as if we're indeed landed in Shagri-la. 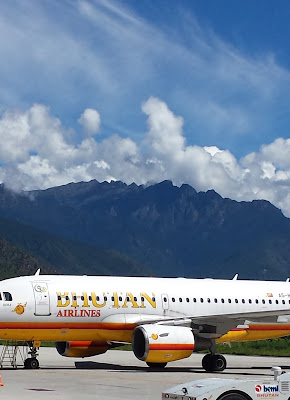 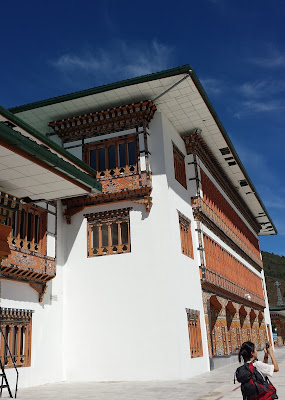 
Our guide, Deechan, greeted us after we exited the custom. She turned out to be this amazingly wonderful, knowlwedgeble, fun, easy-going, and kind, young lady we absolutely adored. Our driver was Nangay, a big, quiet guy with shy smiles that reminded me of my brother.  Both Deechan and Nangay accompanied us the entire trip. Our group was small, just the 4 of us plus the guide and driver.

On our drive from Paron to Thimphu, the capital, we stopped by a roadside temple that had a suspended chainlink bridge over a roaring river that swinged quite a bit as we walked across. It was our first encounter with the many, many temples we visited on our trip.
Deechan said to me, "All my years of taking people here, I'd never seen anyone who was fearless and just confidently walked across the bridge the way you did."  I laughed, maybe I had plenty of confidence in Bhutanese engineering, or maybe I was just too excited to be fearful. 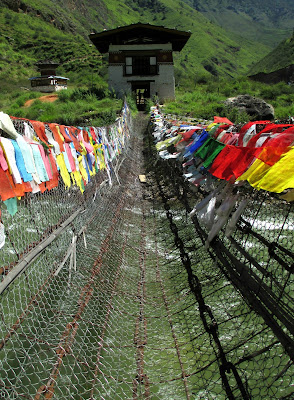 At Thimphu, we had a late lunch at a restaurants that was obviously catered to tourists only.  I later learned that there just are not many local restaurants as Bhutanese people don't really go out to eat. We had our first introduction to Ema Datsi, the most common Bhutanese dish with chili peppers cooked in watery cheese sauce.  Ellen and I instantly became addicted to it.  Later in the market, we saw stalls after stalls selling chili peppers of all kinds. 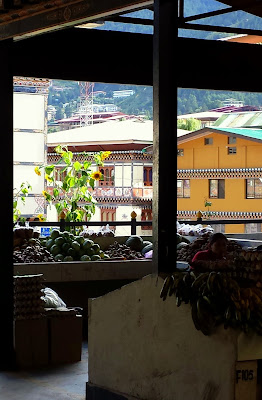 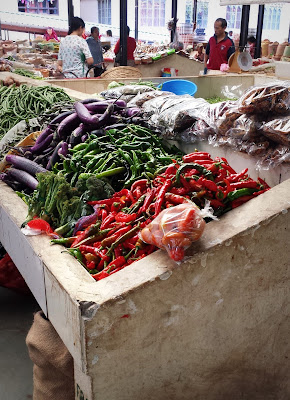 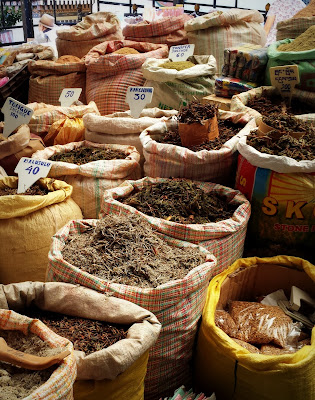 
After lunch we visited National Memorial Chorten.  The place was quite happening. Many old folks like to come here to pray and hang out.  Deechan joked that if people need to find their Grandma or Grandpa in the middle of the day, they'd try to come here first.  At the Chorten, I had my first introduction to walking clock-wise around the prayer wheel 3 times that's unique to the Himalayan Buddhism. 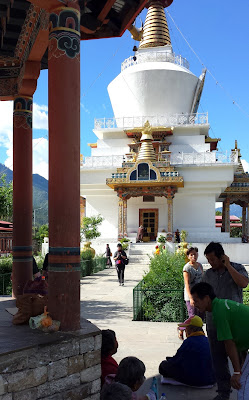 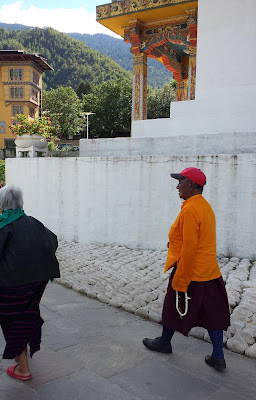 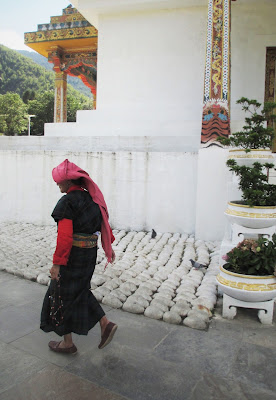 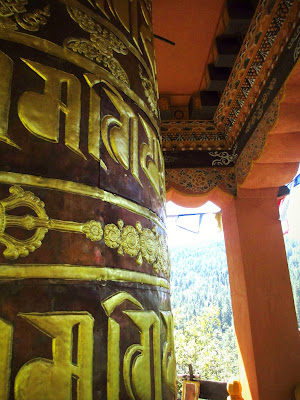 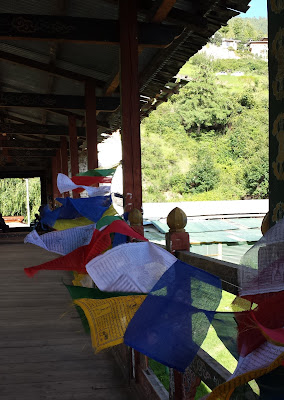