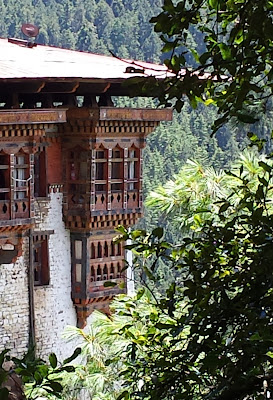 On the second day in Thimphu, we hiked up to Tango-Cheri Goemba, a monstary and Buddhism college that was at the outskirt of the capital.

The hike was not long, about 45 minutes or so, but it was steep.  By the time we got to the monastery, everyone was feeling the steepness and the altitude. Our guide made the driver hike up with us.  Halfway up the driver wanted to turn around. We kept up cheering him along, he finally made it to the monastery with us.

As we were touring the monastery, a foreign young lady walked by and said to us if we'd like to see their work of conservation of ancient wall paintings.  She exclaimed that they very rarely get tourists coming by because no one knows they're there working.

I was very impressed. I was also envious of their work.  Every morning they'd hike up the mountain and work on the beautiful old paintings.

It really was a neat experience to see them working.  I had been to backrooms of museums to tour restorations but I'd never seen conservation on site until now. Also, having many art friends myself also meant having to listen to egos. Often, that ego was paired with an arrogance of caring about nothing else in art but what was immediately relevant. It was sad that this disregard and willful ignorance of art older than 50 years old seemed to be not uncommon among artists that I know. It was even more disturbing to notice many college art programs fostered that notion of caring about only the hot and the trendy art.  So the chanced encounter with these young people from England, China, Korea, Columbia, etc, working on the conservation felt really good. It was a treat to chat with people that have a deep appreciation of art and culture and worked in painstakingly slow pace, no rush, no ego. It was a total treat to see the paintings that most tourists are unaware of. Our guide Deechan said she'd never been to that part of the temple and never seen the paintings all these years of taking tourists to the Goemba.  The colors used on these paintings were derived from the natural pigments were much more subdued than the bright, saturated colors that tend to be used in the newer temples in Bhutan. The overall composition were the most beautiful and thoughtful one I've seen in the the whole trip to Bhutan.

I don't have any photo to share how amazingly beautiful the paintings were as no photographing were understandably  allowed in any temples. 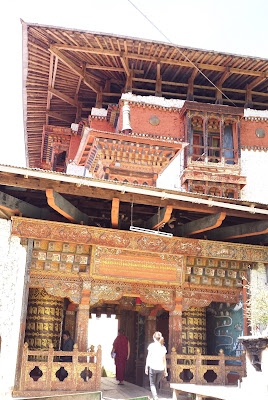 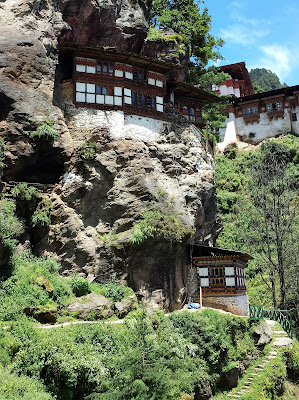 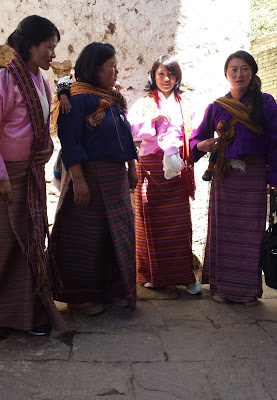 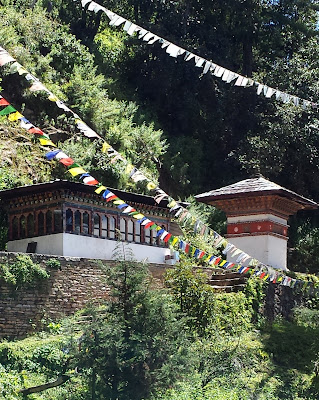 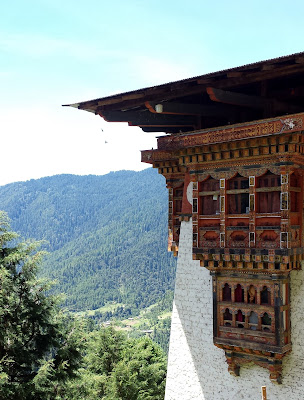 After lunch back in town, we visited the ongoing building site of the big Buddha statue and its temple.
The project was funded by a millionaire from Hong Kong. People of Thimphu seemed to be happy with the shiny giant golden Buddha being built on the mountain visible from the city 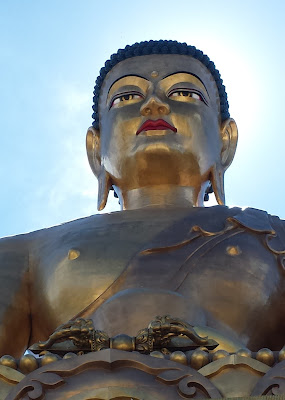 The last visit of the day was to Trashii Chhoe Dzong, where both the Thimphu administrative government and the leading temple were located. We had to put on our long sleeve shirts to visit Dzongs.  Dzongs were basically fort structures that housed both municipal government as well as the main official temple of the area with large courtyards between the buildings that often held festivals. This one in Thimphu was impressive. This was also where the king of Bhutan worked. His modest palace was right next door. Speaking of the king, Bhutanese really love and revere their king. The king's picture was everywhere in the country. 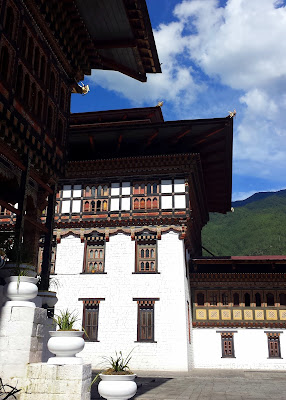 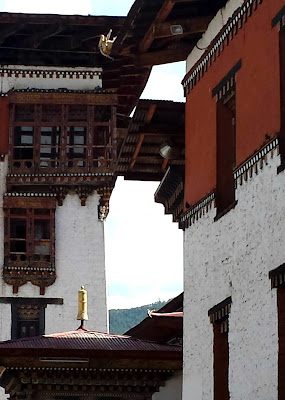 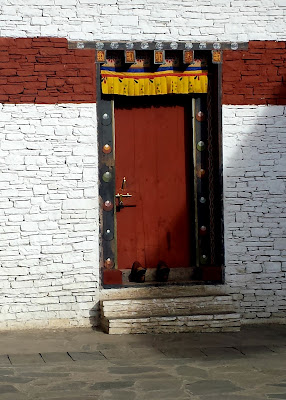 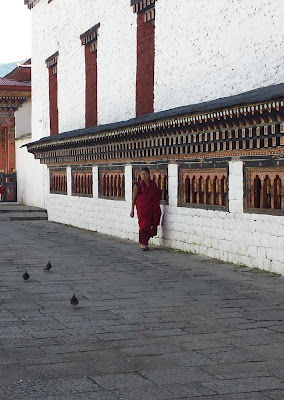 After returning to the hotel, we walked around the one block downtown nearby.  Yes, the downtown of capital of Bhutan basically was just one block, and no traffic light.  In fact, there was no traffic light in the entire country. In the late afternoon the downtown was happening with many young people walking around. Many stores were like corner store type that sell soda, cookies, etc. Some were clothing stores, and there were quite a few cell phone fixing places, only a handful of souvenir stores on the block.  We bought some drinks and chips and headed back to the hotel to hunker down for the evening as there was not much to do at night. I asked Deechan what do young people like herself do at night, she smiled and said, "Karaoke."

She warned us not to walk around downtown after dark because all the stray dogs would come out. She said there is probably more stray dogs than people in Bhutan. The good thing is, according to the guide, city governments are starting to spay and neuter the stray dogs.  If a dog's ear is clipped that means the dog has been fixed.

We started noticing our guide Deechan would pat any stray dog that came up to her, and sometimes she would feed them. She would talk to the cats, dogs, cows and chat with old folks. She laughed and said, "I'm loud, that's why the old people all like me. They can hear me."  She said many people feed stray dogs.  Temples feed stray dogs too. 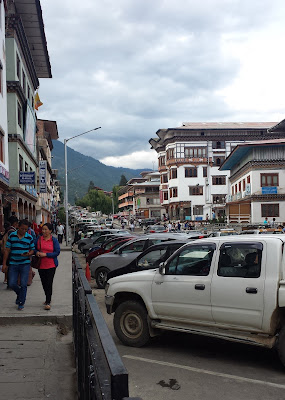 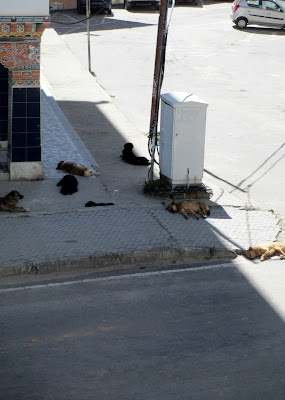 Dogs chilling in the afternoon on Thimphu street

Posted by yellowcosmo at 9:01 AM