So I didn't really have the budget to take classes at SOAR, but I was able to allow myself a little shopping at the marketplace yesterday.  It was my very first time to go to any knitting/fiber event. 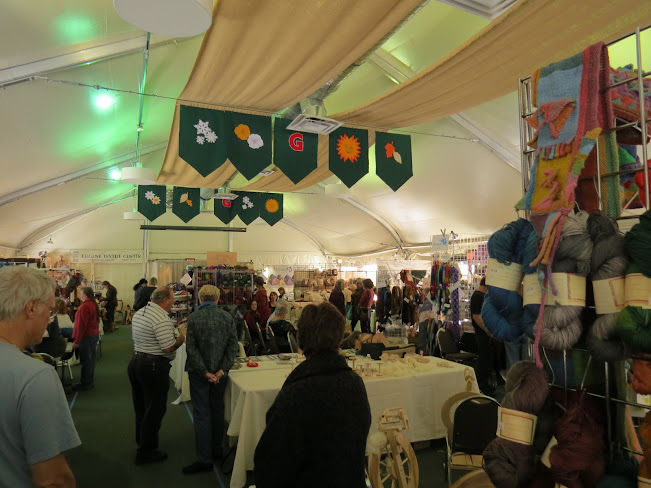 Paul and I drove around the lake to Tahoe City.  I was amazed that I could talk him into a shopping trip.  It helped that we just had our first snow this week and the scenery was beautiful.

I spent more money than I should, but I was able to get some fiber I'd never worked with.  Now I'm a bit intimidated by some of the fiber I bought.

I got some camel/silk from A Verb For Keeping Warm.  I so love their colors and I'd never worked with camel.  I also got some Pygora/Merino from Rainbow Farms.  Until yesterday, I'd never even heard of Pygora goats before.  I couldn't resist some Merino/Silk from Opulent fibers, and a hank of merino/tencel yarn from Sincere Sheep because I love the colors.

The highlight was meeting Mr. Ashford..  I felt like such a fan-girl.  I never do that kind of stuff as I'm not into the whole celebrity thing, but it was Mr. Ashford!  I was totally smittened by how nice he was.  He invited me to sit down and spin on the Traditional a bit.  He even got Paul to sit a spin a little, something I could never do.  It was really cute that he asked Paul what to do if he encounters a bear when he found out Paul is a forest ranger.  Elisabeth was also nice to show me the knitter's loom, which I'd love to get one one day. 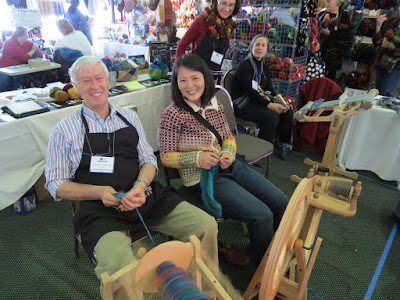 I had such a good time petting all different fibers.  But it sure was dangerous to go to a marketplace like that and I wanted everything in front of me.  Good thing I had enough self control to only spend the cash I brought and not use credit card.  I must say I was also impressed with Paul's patience.  Going shopping with him was usually the most torturous thing for both him and I, but he actually had not too bad of time seeing things.  He enjoyed meeting with Mr. Ashford as well as loving the display colors of A Verb For Keeping Warm.

I almost forgot to mention I wore my "Autum that Cannot Make Up Her Mind" and I got quite a few complements. I know, I was such an exhibitionist, but I couldn't help it.
Posted by yellowcosmo at 11:01 AM