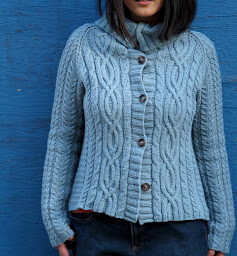 After much frustration writing a pattern for top-down raglan style Midsomer Sunshine, it finally dawned on me that I should write the pattern knitting bottom up instead.  I don't know why it took me months to come to that realization.

Making Midsomer Sunshine was very easy, but writing a multi-sized pattern for top-down raglan style that involved continuously adding new cables of different charts was the most challeging pattern I'd ever attempted.  It was challenging that cable sequence required a lot of instructions for each size individually.  With the current trend of patterns needed to be explained in more details and things needed to be spelled out more specifically, it was something beyond what I could handle.  I did write one that I knew as much as the instruction was clear to me, it was probably not so to at least half of knitters out there. I put that pattern aside, too scared to even have it test knitted. 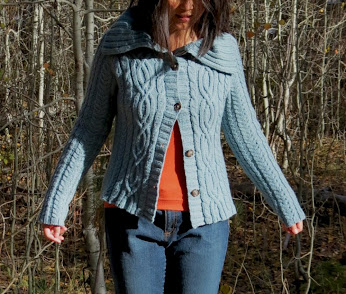 One day while knitting, I had this brilliant idea of re-knit the sweater from bottom up and write a pattern.  I dug through my stash and got the Quince & Co Lark in color Bird's Egg and started knitting.  I had 2 balls in my stash, after finding the yarn being good for the design and for the color, I ordered 7 more.  The gauge came up just slightly smaller than the original version, so I miscalculated the yardage.  After I finished all the yarn I still needed more. BUT, Qince & Co was out of stock with that color when I tried to re-order.  Fortunately, I convinced a Raveler to destash her 4 skeins to me.  I finished the sweater with 10 skeins of yarn. 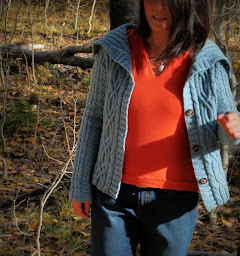 I honestly really love this sweater.  I was so comfortable wearing it and walking around the woods and meadow behind our house for photo shoots.  It was no small task to convince Paul to help with photo shoots. The sweater turned out to be exactly the type of thing I love wearing, almost as much as how I love knitting it.  I made it in the style of a short jacket.

I just sent the patterns out to test knitters. I'm hoping to publish it around early February, almost exactly one year since I knitted Midsomer Sunshine. 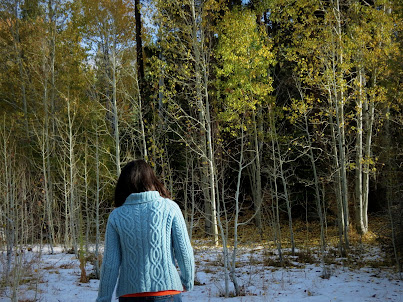 I'm calling the pattern Hello Winter because... I don't have a good story for it, truthfully. I finished the sweater just few days after first snow here, but it's now fall weather again. Leaves that turned kinda dull two weeks ago as if we weren't going to have a nice fall, are now in bright yellow again. Next week, the temperature is supposed to be higher, not quite back to summer, but not really moving towards winter either....  If the sweater is really more reflective the season changing this year, it probably should be called "whatever."  Obviously that may not be the best name for a pattern.  By the time the pattern is ready for publishing, it should be solidly winter. I think.

Posted by yellowcosmo at 1:42 PM