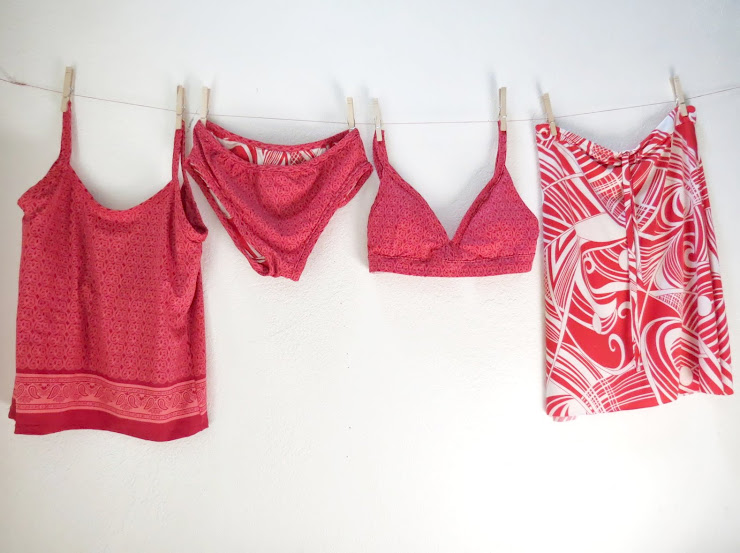 So I was in Reno earlier last week and decided to check out Mill End store at Reno.  It turned out to be even larger than the one in Carson City.

I got a bit greedy and bought a bunch of fabric.  Everything was under $4/ yard, except for one with border print, a bit pricier.

I'm in love with stretchy synthetic print skirts. They are so convenient to wear to the beach or around town. They dry instantly and are wrinkle free. I'd made a few in the past with draw-strings. All based on a skirt I bought nearly 10 years ago. At Mill End, I picked up a few fabric for making that same skirt, including the one with border print. It was looking kinda nice, and I thought I'd never worked with border print, why not a bit splurge? I got nearly 2 1/2 yards For $17.

That night I had a guilt attack waking up 5 o'clock in the morning. I felt so guilty purchasing the more  expensive fabric. I promised myself that I'd sew it up that day instead of stashing it away. Sigh, I do that all the time, buying something, then feeling guilty for stashing it away, like a lot of yarn. Then I lessen my guilt by using it up right away.

Next morning I looked at the the fabric and my heart sank. The fabric was medium weight with Lycra. It looked more suitable for swimwear than a summer skirt. I obviously wasn't thinking when I was shopping. But I promised myself I'd use it up!

The problem of living up here in the mountain is that we don't have many stores other than groceries, hardware, other essentials, sporting goods, and tons of stores that sell things catered to tourists that are completely useless to us. The only fabric store in town is more a quilting store and half of the time it doesn't have what I need (though it has a huge collection of quilting fabric.) I didn't have a pattern on hand for swim wear and I wasn't about to drive down the hill just to shop for a pattern. I was also not keen on the idea of downloading pattern from internet. I'd never done it with sewing patterns, but I assumed it would take tons of paper and lots of time for assembly the pieces... I could be wrong with that impression, but I did not want the extra work.

I decided to make my own patterns...somehow that seemed easier work than assembling downloaded patterns...

I only wanted a tankini/yoga tank at first with built in bra. Digging through my piles of clean and dirty laundry, I was able to find my workout tank top from Target. I took some basic measurements from it and drew out the pattern on brown craft paper, the only paper on roll I had around. I made some adjustments and began cutting and sewing the tank. 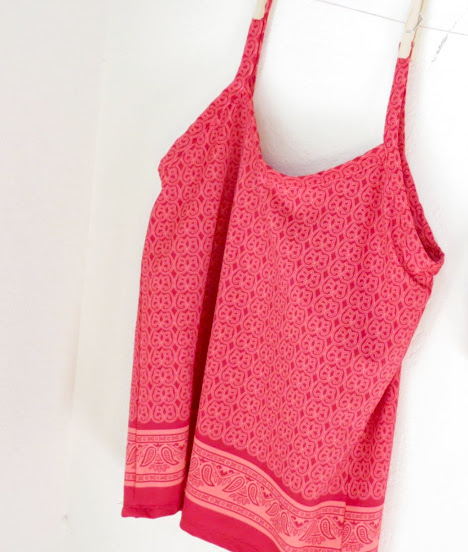 I found out the stretch stitches on my machine that I'd never used were actually for sewing knit/stretchy material. However, after a bit fussing with it, I couldn't get it to sew stretch stitches forward. The machine kept sewing them backwards, so I ended up using narrow zig-zag stitch. It worked out perfectly. I did pull on the fabric as I sew (thank you Jen!) and that worked great for this fabric.

Everything went smoothly until binding strip. They were cut from the fabric along the stretchiest side. I've done sewing folded bias tapes before, but sewing with slick material was different. I didn't bother to stop and think. I just sew on both sides of the fold to the fabric at the same time. That was completely disastrous. Having already ripped the binding strip seams twice and l still couldn't get it right, I simply had enough with ripping seams that I decided to cut off the tank shoulder part that was sewn horribly with binding strips. I decided I would just do the shoulder straps entirely with binding strips.

I started Googling and found few great videos on YouTube of how to sew bias tapes. Duh! sew one side first, then fold over and sew the other side!  How simple was that???  Could not believe I didn't figure that out. Like I said before, sewing techniques don't seem to be that intuitive to me.  Construction, yes, but the execution, no. 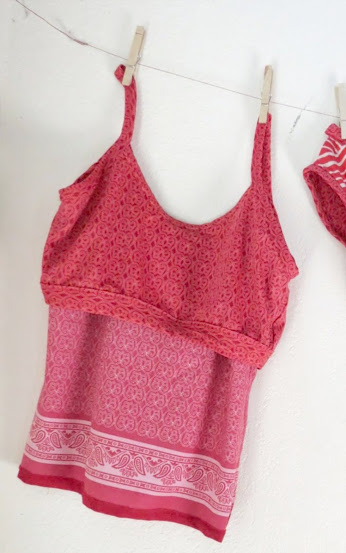 It took a lot of careful pinning but I did it, and with a self-bra. The Lycra fabric had so much stretch that I'd decided I'd forego elastic and just used wide binding strips cut from the fabric for the underside of self-bra.
I was so very proud of myself.  The tank fits very well.

The next day I  thought I'd make a bikini bottom to go with the tankini. I had this crazy idea of making it reversible. Of the 4 fabrics I bought that same day, one of which was a bit lighter weight and it has 4 way stretch as well.  Being synthetic material this would work as the reversible lining. I took out my bikini bottom and drew a pattern based off that but with a more coverage and higher waist. 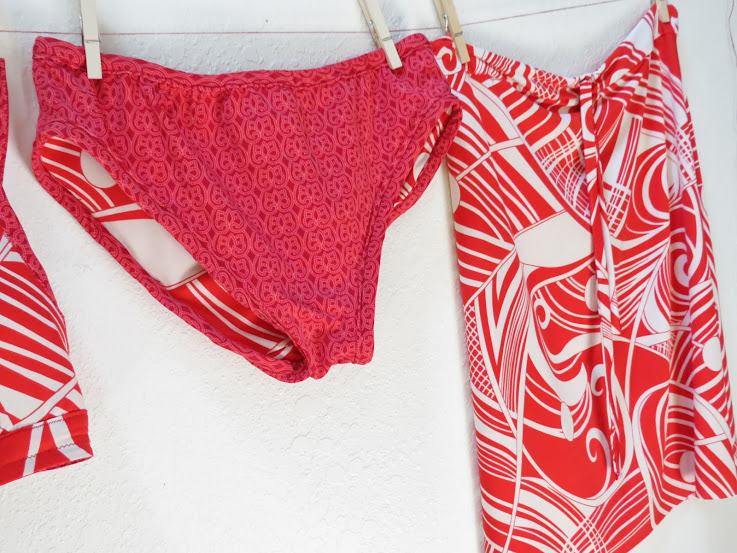 Once again I ran into problem with sewing binding strip. You'd think I'd learned from making the tank. No, I was again not doing it right because this time I had to add 3/8" elastic to it when I sew the first folded side. It turned out so ugly that I had to toss the whole thing. I could only comfort myself at least it wasn't a lot of fabric wasted.

After few hours of walking away from the defeat I began brewing in my head how I could do it right. I realized that I should machine baste the elastic onto the binding strip first, then proceed to sew the binding like before with the tank. The basting did the trick! It worked out really well after I recut the fabric and re-sew the bikini bottom. The entire process didn't go too fast because I took my sweet time pinning and sewing so to avoid more ripping seam.  My patience paid off.

I was so thrilled with how the reversible bottom came out. 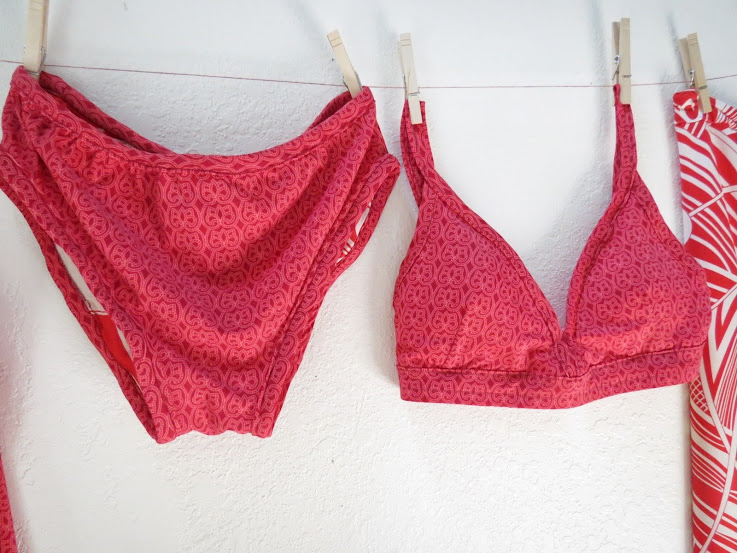 I still had at least another yard of fabric left, so I decided to make a bikini top. Believe it or not, I actually had a pair of bra cups around. I was planning on a slip for a dress I knitted, but never got around to it. I based the pattern on a bikini top I had, that and the shape of the cups. I did some refining shapes, measurements. I always dislike how halter top pulled on the neck but unfortunately that was all I have around. Non-halter bikinis that are decent looking and cost more less than $25 seemed hard to find.  And uni-boob look in sports bra style was not what I look for in bikinis either. So I made my bikini top in regular bra style. First, I drew the pattern to cut in one piece where the fold line was at the back. It looked like this:

It too was made reversible with lining fabric. I made darts and cut the cups to fit the shape.
2" binding strips folded into quarters were sewn onto edge A first, then B, then C then 4" binding strip with 1/2" Elastic to D.

Love the result. I actually think I may like the print on the reverse/lining side even more... 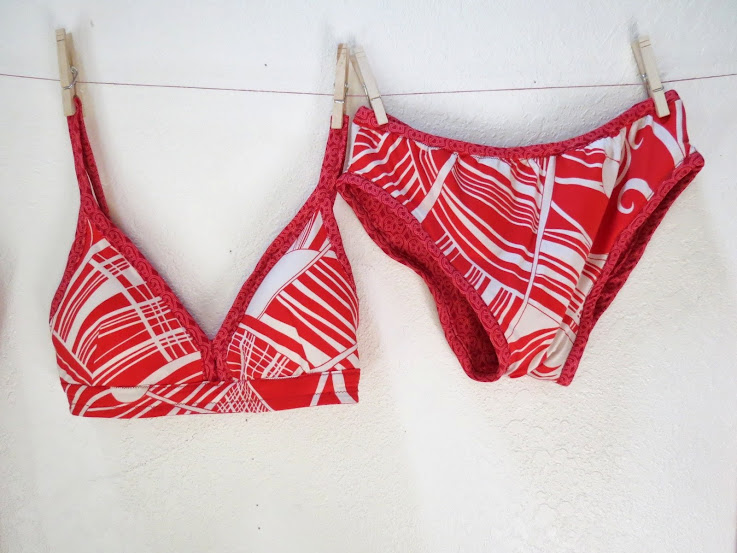 The skirt that used the same fabric as the lining completed the set. It was the same shallow A-Line, drawstring skirt, knee length, as all other ones I'd sewn previously. I made the simple pattern with drawstring encased in waistband, super quick project. I didn't even bother to hem bottom since the fabric does not fray. 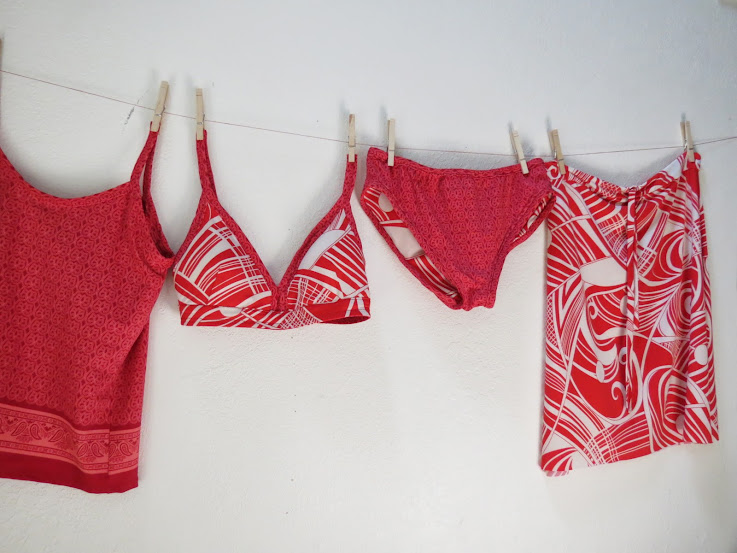 I'm so pleased with myself of this set, especially after the last frustrating dress. Not that they were super easy for me to sew, but through the struggles, I learned a lot. The fabrics were easy to work with, and the seams looked fine with zig zag stitches. Best of all, these pieces fit very well!!! The great thing of sewing with knits (good knits, not the frustrating kind) - they are more forgiving when it comes to fitting.

I actually went for a swim in the lake earlier today to test out the swimwear. They worked! OK, the bikini top can use slightly more coverage for my own liking. It's more coverage than most store-bought bikinis, but I still prefer full coverage. The fabric, as expected, loosened so very slightly when wet, but no wardrobe malfunction to worry about. The bikini bottom was absolutely perfect because there was elastic with all binding strips whereas the tank and bikini top didn't have elastic on the shoulder straps. Though they both worked for swimming, but my most ideal fit would be even a wee bit tighter. I wouldn't want the tankini to be any tighter because it can also work as a yoga style tank top, and for that it's absolutely perfect fit.  In fact, I wore the tank top and the skirt to get a bite in town first before heading to the beach. I love it, a great combo for walking around. Since I still have enough fabric left to make another bikini top, good thing it doesn't take a whole lot of yardage, I may one day make another one with full cup coverage with elastic to shoulder straps.

I cannot believe I don't have much summer time left. I'm having such a blast learning how to sew. I learned a lot with sewing these swimwear pieces. I realized how much I love making my own patterns. I'll be looking into getting a book on making patterns for myself. I love thinking about how to construct something, even though the actual execution of sewing technique is still frustrating at times.

This morning, I was secretly dreaming sewing another mini "collection" this fall.  I hope one day I'll be able to make clothes that are beyond the most basic styles.
Posted by yellowcosmo at 5:40 PM