A Rather Adventurous Road Trip

I'd decided I absolutely need to get out of town for a few days.  The work, the deadlines and everything was starting to get to me.

Paul suggested we go up to Lassen National Park.  It was less than 4 hours drive away, and I'd never been there. On Friday, we packed up in the morning, and drove through Truckee, Sierraville, hand late lunch at Quincy, and got to Lassen late in the day.  After setting up our tent, we went for a short hike until it got too dark. 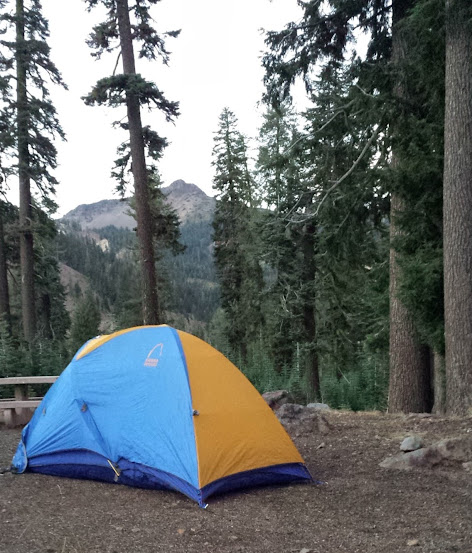 We're planning on some hiking the following day.

Well, we forgot to check the weather before we came.  It rained in the middle of the night and did not stop in the morning.  It was so foggy that we couldn't even see the Lassen Peak above our camp site.

Paul woke me up at the crack of dawn to pack up and go before it gets worse.  It was super rainy. We tried to pack up as quickly as we could.  We decided to drive through the park up north even if we could barely see anything in the foggy rain. That was probably not the smartest decision.

There were downed trees, fallen rocks, and rocks sliding off hill towards the road as we drove pass. We even accidentally scraped over a rather large fallen rock. Visibility was poor as we climbed over summit, and snow began to fall.

Paul and I had to get out of car few times to move the fallen trees away from road and clear the debris. At the sight of the first downed tree, we thought we should turn around since we just scraped over a larger rock, and it started to snow. A SUV pulled up behind our little Subaru. The guy was about to tow the tree with his car to the side so he could pass. Paul got out and helped him to just push the tree aside by hand. Then we decided to continue too. At the sight of second downed tree, the SUV was able to tow it away. Paul cleared the debris. The third fallen tree was small enough the SUV just drove over it.  But we had to get out and move things.  Finally on the 4th fallen tree, both our car, the SUV and another car coming the opposite direction stopped and began to clear the mess.  A ranger truck pulled up within coupla minutes and started chopping the tree with a chain saw.  We all got soaking wet without doing any hiking.  We never got to see a single sight except fallen trees. The ranger told us our little car was the last car to pass through as the road was closed behind us, possibly for the season.  The entire time we drove through the park, we didn't see any other cars besides us 4 cars at the last fallen tree. There were other fallen trees but it looked like the rangers got to them first.

After driving over the summit of nearly 8000 feet when it was snowing, we made it out the park. I was rather worried the whole way if my car would have problem after scraping over that huge rock. It would be a very bad time and bad place to have any car problem. But it seemed to be driving fine without any noticeable differences.  I was also anxious seeing all the trees swaying back and forth in the gusty wind along the road, especially after seeing so many downed trees in 8 or 10 miles. 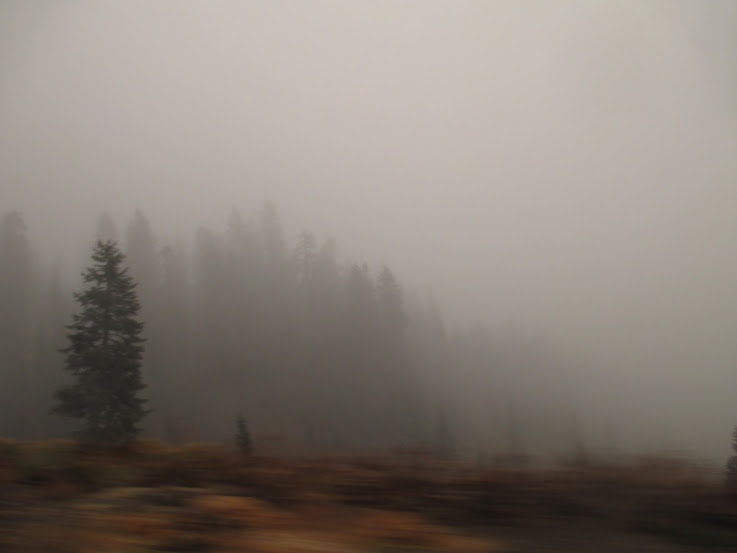 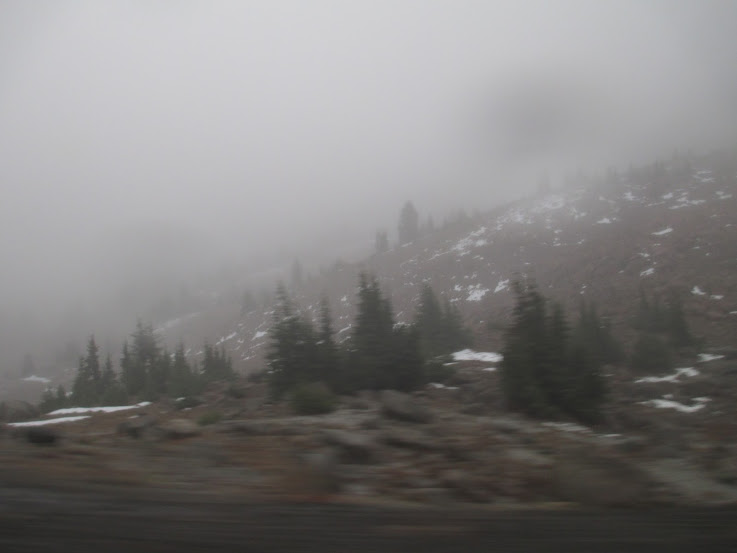 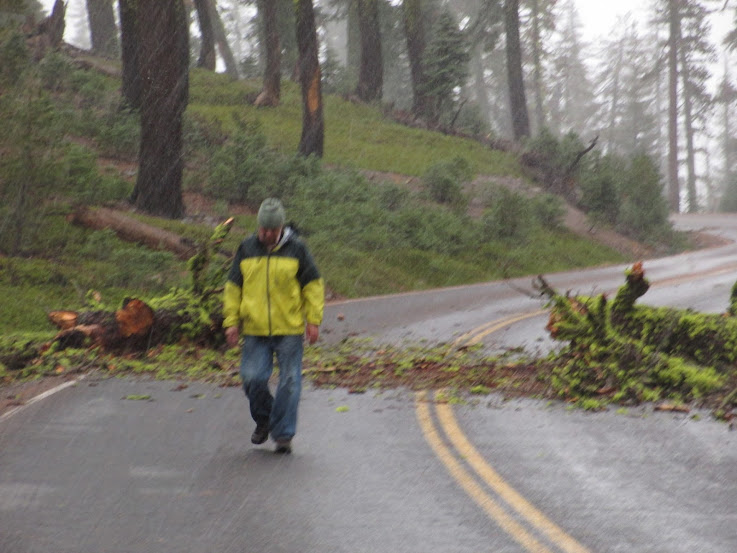 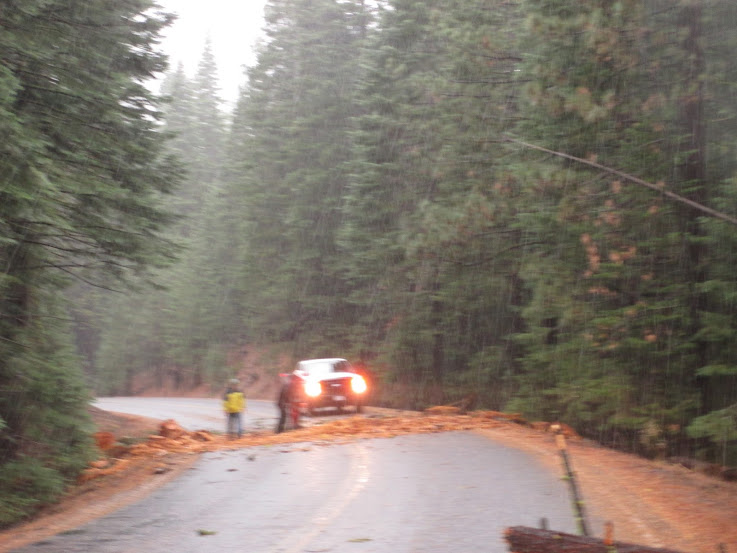 I think Paul rather enjoyed the adventure.  I could see he missed his Forest Service ranger job.  He was a ranger for nearly 10 seasons.  But this year due to severe budget cut, he was one of many that got cut, so the forest service is staffed with mostly interns rather than real employees.  One of the responsibilities he loved was hiking around and remove fallen trees and maintain trails. Now he's trying to see if he can get back to computer programming which he did before we moved here.  I think there is always going to be a part of him that misses the outdoor work even though he really does love programming.

The trip was so short, but packed with interesting bits.  I think we'll have to revisit Lassen again since we really didn't see much except the minimal views from our car windows.

But I was so glad to have gotten out of town for coupla days.
We drove through Susanville, and on the way back we saw a full Rainbow. 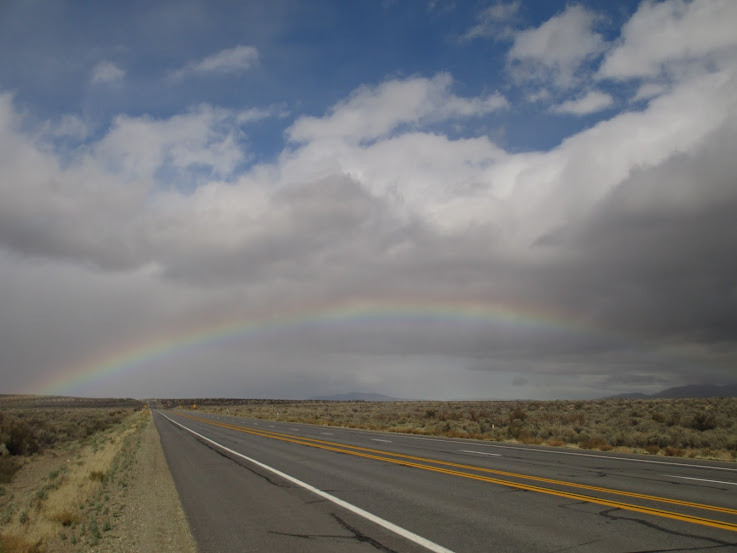