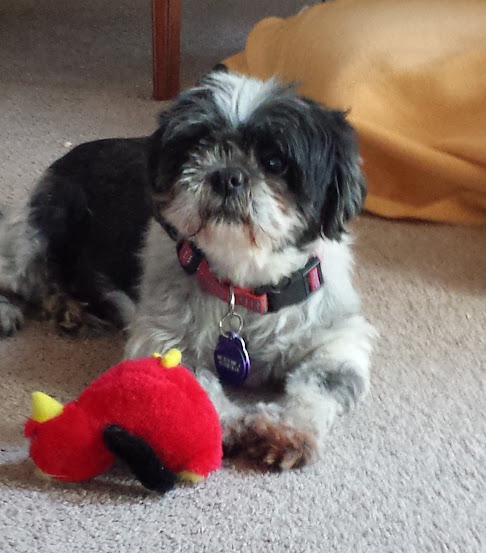 So you asked, Doggie Friendly Beach, Kiva?
Well, we have a new dog in our family.  This little guy came home with us on Monday!
He's an adorable 7 year young Shih Tzu, the same breed as Cody.

After Cody, we never thought we'd be ready for another dog for a long, long time. But out of the blue, I just happened to be checking our local animal shelter website last Saturday. There he was.  My heart pounded when I saw his picture, he looked just like Cody.

Almost instantly, I knew he's my baby.  Paul knew it too. I was rather upset that by the time I saw the picture, the shelter had been closed for 30 minutes and won't be open until Monday.  The thought of this little guy staying at the shelter for that much longer was awful. Judging from the website, he has been in the local shelter for nearly 3 weeks, before that, a rescue group.  So another shelter before that.  Our local shelter has very high adoption rate (and if I was told correctly, they don't euthanize dogs) so it partners up with a rescue group of Bay Area to bring their rescued dog in for adoption. Paul said, "that just too long for him to be in shelter, we have to go get him."

First thing Monday morning, Paul insisted he'd come back from work (he had to be there as he'd agreed to be the only person around for the half an hour that day.)  After he came back around 9:30, we drove to the shelter.  I was nervous all weekend, but extra nervous on the way there. All the what if's.

As soon as I saw him, my heart melted. The lady at the shelter let us take him out for a short walk. He sniffed obsessively with every plant.  Paul and I grinned, that was exactly what Cody used to do. I said to Paul, "He is ours!"  This little guy just rolled over all the time on the floor ready for belly rub when Paul crouch down to pat him.  Paul said, "Connie, Look!" as I was doing the paperwork at the counter. We couldn't stop smiling.

He sat on my lap in the car the whole way home. He's a bit smaller than Cody and weighs about 10 pounds. His face shapes slightly different from Cody on the front, but his profile looks just like Cody, but smaller.  His coloring on the body is similar but with spots on the lighter color area. So there are a lot of similarities in appearance and personality and behaviors, but also very distinct differences too. He is his own little boy.  He likes to sit right next to people and snuggled up to the legs and put his head in the lap, but he really does not  like to sit in the lap.

He loves long walks.  He's house trained.  The lady at the shelter said his previous owner passed away.  He really looks like he came from a home where he was well-treated as we don't have to train him at all so far.  We feel very lucky that we don't have to do the work.  He has totally won our hearts!

Posted by yellowcosmo at 9:57 AM