I don't like to cook, much.  Every once in a blue moon I'd get into it, but normally it's not something I get a lot of pleasure out of doing.  I do cook when I have to for meals, but I'd never cook to entertain.  I think that would surely turn into an entertainment of a different kind. On the other hand, I do love eating, and my waistline can attest to that.


Paul is usually the one that cooks most of the meals around the house.  Part of it is of pure survival for him.  If I follow a recipe I'm good, but the thing is I really don't like to read directions, of any kind. There are only a few dishes I can whip up quickly without consulting cookbooks, and Paul is not a fan for most these dishes.  So he cooks, and he is much better at it than I am.


This week he is visiting his dad at East Coast.  Before he left, he joked that I may starve while he is away.  I was determined to prove him wrong.  Last night I made pesto, something I rarely made. It was all great until I realized I didn't have parmesan cheese.  I was very tempted to throw in ceasar dressing as substitute, but I came to my senses.  It turned out pretty good  even without the cheese, if I may say so myself.


This morning I wanted an egg sandwich.  I scrambled some eggs, put it on bread, and put a slice of cheese and a slice of fake, vegetarian ham on it, and wrapped it in foil and put it in oven.


After 7 minutes I went to get the sandwich out of the oven and saw the top coil /heating element was on fire, albeit a small fire, it was fire, and not from debris in the oven, it was the coil burning. I completely freaked out.  I grabbed the sandwich out of the oven, turned off the oven and couldn't figure out what to do.  I took my water bottle and sprayed the burning coil with water (exactly what NOT to do according to many sites I read afterwards.)  It just kept burning, and sparks flew.  I was in panic mode and grabbed the ancient fire extinguisher we have, but couldn't figure out how to use it and I wasn't sure if I should use it or not.  I kept spraying water onto the coil like a total fool, and watched the coil continued to burn towards the end.  I was envisioning an exploding oven, thinking I have no time to run next door to ask our neighbor for help, or if  I should call 911.  Finally, the coil darkened from glowing red to orange, to gray, and the fire fizzled out.  I totally freaked out during the whole time.


Since I cannot pull the oven out to unplug it, Paul told me over the phone to go to the garage and turn off the breaker of the range.


Now I have very good reason not to cook - the oven is broken, and the stove is off power.


This totally scared me.  I feel like I have to stay home all day just to keep an eye on that crazy oven, and I really want to go for a walk.  Maybe once my imagination quieted down, I'll think logically and will be able to leave the house.


What bummed me out the most is that I can't dye up some spinning top over the stove as I'd planned for the weekend. 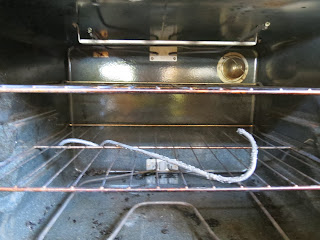 The top coil is broken off from the burn.