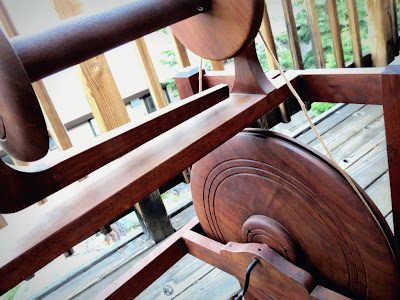 I found this spinning wheel when I was at my parents house for mother's day.

Paul spotted it when he was helping me with getting things down from the attic shelf of my parent's garage.
He said, "there is a treadle for something."  We realized it was a spinning wheel when he pulled it down.

It must've been left there by the previous house owner.  Mom and dad have been living in that house for nearly 20 years.  So this wheel had been forgotten for at least that long.

At first I thought it looked very similar to Ashford Country Spinner for bulky yarns. I brought it home, and googled it.  I believe it's a Cowichan Style Spinning Wheel made by Sid Sharples and Jack Daniel.  It was for spinning bulky yarns to make Cowichan sweaters.

Paul told me the wood is Hunduras Mohagany. She is a beauty, heavy comparing to my Ashford Traddy and Traveller. It has a giant bobbin. I think the wheel is in working condition. I'll have to change the drive band and break band and retie the connector of treadle.  I just have no clue how much use I'll actually get out of it.

I'm not even using my Traddy after I tried it with a jumbo flyer/bobbin.  It still needs some tweaking to make it run better.  But the extra wheels around the house sure makes me feel so rich, not to mention giddy knowing both the Traddy and this one were found free in garages left by old owners. 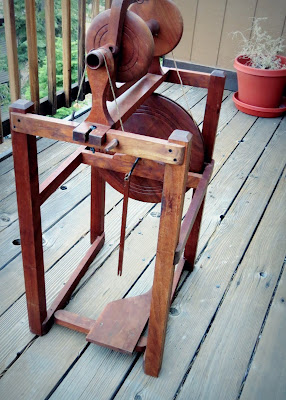 Posted by yellowcosmo at 8:42 AM