I am just beginning to understand what it is to paint.  A painter should have two lives, one in which is to learn, and one in which to practice his art.
-Pierre Bonnard

This time I do have some knitting to report.  I finished a hat and a pair of mittens from the same skein of yarn I spun.  The summer Music Festival Club of Two If by Hand came last month with the colorway Bumbershoot and it was 4 oz of Rambouillet. I began spinning using short backward draw and I was not enjoying it at all.  The staple was very short.  So I switched to long draw method. a very good move.  I immediately found the Rambouillet pleasant to spin, and the resulting yarn bloomed after wash, a lot.  It was very squishy, much more so than merino or BFL.  Love it.
The spinning was done over a week ago.

This week I began knitting a hat with the yarn.  A simple hat and a little cable design on the side.  The colorful palette demanded a simpler decoration.  It was slightly slouchy.

After the hat came the mittens from the nearly half of the 380 yards of sport weight left.  They were just plain St st all the way.

While knitting the mittens I kept thinking how much the colors reminded me of one of my favorite painters, Bonnard's work,

The colors may be akin to some other artists' palatte as well, such as Diebenkorn, but up close it's more reminiscent of Bonnard because the brush work in spots of color rather than flat area of colors as a result of 2 strands plying. 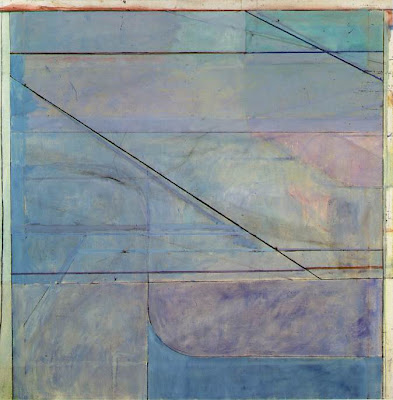 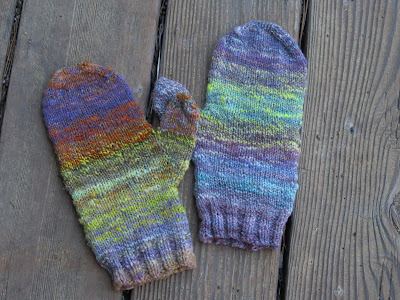 Back when I was living in DC during grad school years, Phillips Collection was within walking distance from our apartment. After visiting many museums in the world, Phillips remained to be one of my most favorites. For a not overwhelmingly large museum, it housed a superb collection. Sometimes when visiting a collection composed mostly of third rate work by big names, like a bad Monet, or so-so Picasso, I'd get the sense that the collector was collecting by name rather than a profound appreciation. But at Phillips you could feel the collector's love of art and the depth of it. For example, I didn't care for Renoir at all, but the Renoir at Phillips made me re-evaluate my opinion of the artist, the Luncheon of the Boating Party.

Being a painter, I bow to the supreme use of color by Bonnard.  Both him and Matisse, in my world, are the 2 colorists of all time. His work may be seemingly charming but the use of color is absolutely experimental for his time.  His composition is more studied than its informal look impart with first impression. 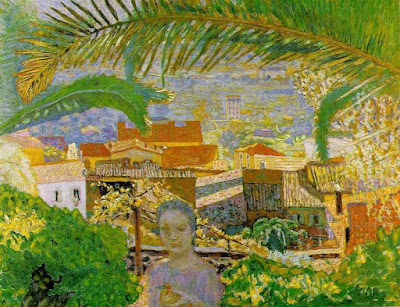 The Palm at Phillips is really my favorite Bonnard that I'd seen in person.  It could be because I'd visited it so many times that it became personal to me.

Then there is The Riviera, 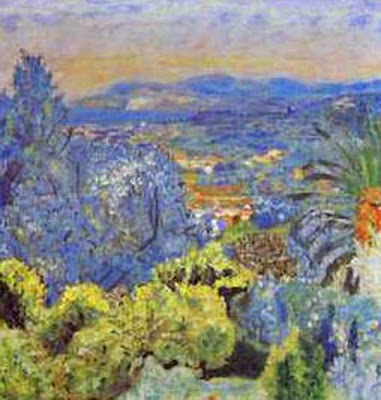 My mittens made me think of these two paintings and that's a wonderful thing.

Posted by yellowcosmo at 8:35 AM