It snowed last week.  It was enough for my car to slide a bit driving over summit. It even snowed all the way down to the valley.  But today is gorgeous.

Jake's Peak above us

Emerald Bay below us
Heavenly Ski Resort across the lake

Paul and I went for a short hike. Instead of hiking up behind our house on the east side of the lake like we always do, we decided to drive to west shore and hike around Desolation. It felt like a trip, though only 20 minutes drive away from where we live. At first I wanted to go to Angora Lake, but the gate was closed.  So Paul took me to the base of Jake's Peak.  We started on an unmarked but obvious trail, but it kinda disappeared among the loose gravel and manzanita bushes.  We bushwhacked our way up the hill.  Then as we were heading straight uphill in the loose gravel that was like sand, I literally could not move any further. It was like a cartoon of fast moving legs going nowhere.  After 20 seconds, I said to Paul that I felt like I was on an elliptical machine, legs kept on moving fast at a stationary point and I couldn't stop moving because I'd slip down hill.  It was hilarious.

That was what so fun about today's hike.  We didn't see a single person during our hike.  The weather was gorgeous, more like Autumn than Winter. 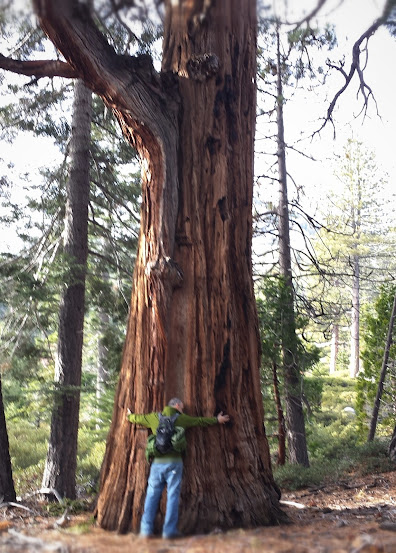 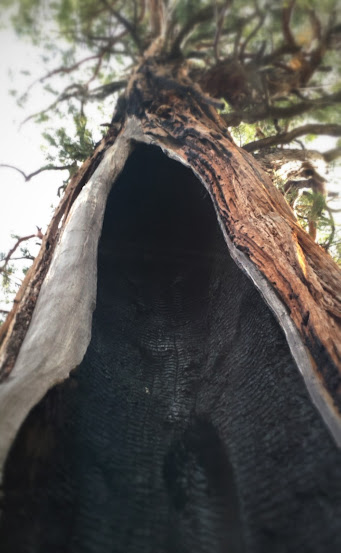 After we got back to where we parked, Paul saw an Incense Cedar a little up the hill that he absolutely had to check it out because it could be the largest Incense Cedar he'd ever seen.  Then it was a nice surprise when we walked around to the back side.  It was hollow with burnt out center.
Paul said when he was a ranger for the Forest Service, people used to ask him if the Incense Cedars are Sequoia. He also had people telling him they saw brown bears. He'd tell them we only have black bears around here, but the people would insist the bears were brown so they couldn't be black bears.

We also spotted some Sugar Pines.  It used to be the most common trees here in Tahoe Basin until mid 1800's logging boom around Tahoe due to the discovery of Comstock mining at the nearby Virginia City. Sugar Pine was so excessively logged for mine shafts.  It's now not that often one can spot Sugar Pines.

Posted by yellowcosmo at 6:42 PM